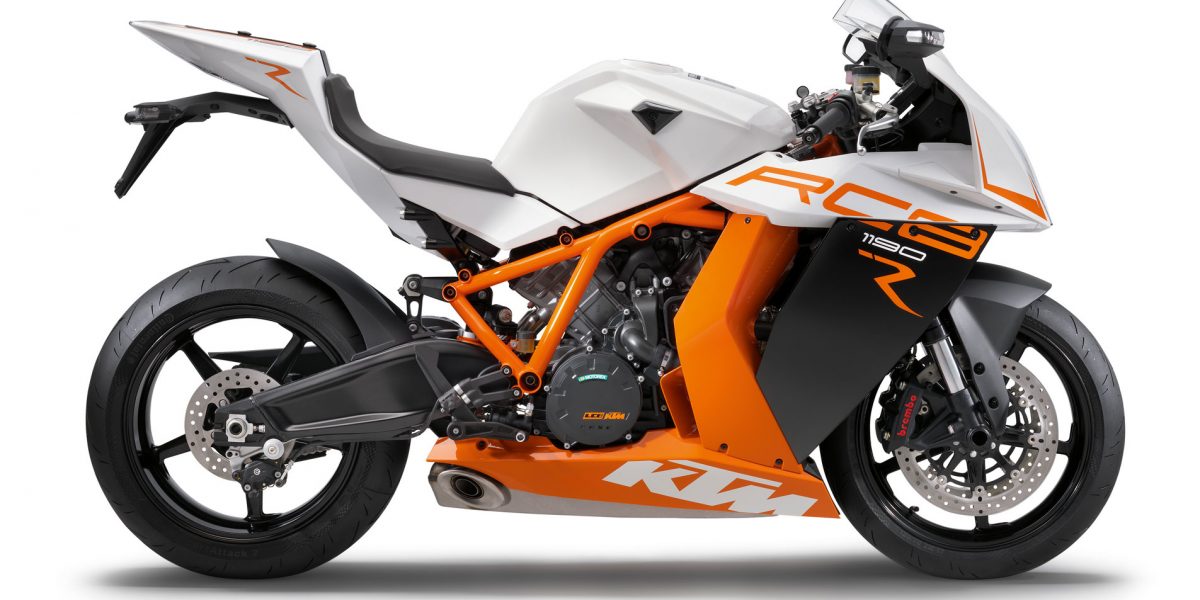 Whilst lamenting the departure of KTM’s mighty RC8 R from the Mattigofen production line, Paul Browne has some good news. Whilst he enjoyed a particularly gratifying spin on a low mileage model which has just hit the market, his spare Euros have been earmarked for the kids’ Christmas list. That is to say, it could be yours.

Back in the day the engineers pulled out all the stops in the art of engine building when it came to this machine. 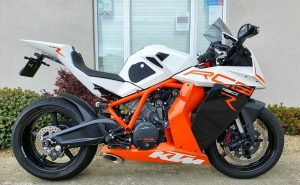 The RC8 has been gone from production for a number of years now. But a low mileage model R (pictured right) has just appeared at Adventure Motorcycles Ireland in Gorey.

This is an exemplary example of the revised 2011 version which offers improved fueling and more power than its predecessors.

The Austrian company managed to do this while retaining the bike’s iconic looks.

The engine was also tweaked. A combination of a heavier flywheel, two spark plugs per cylinder and better cam timing all combined to make the bike more rideable.

Add to this the fact that the rider can adjust all the ergonomics, seat, bar and footpeg height, and the result is a bike that, once set up, is more than easy to ride fast.

Interestingly enough it has no electronic rider aids. No ABS. No traction control. No adjustable fuel mapping. Nothing at all. 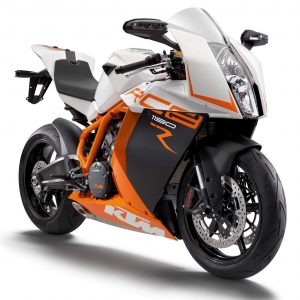 This is indeed one of the very last ‘Hairy Chested’ motorcycles.

If the rider gets it wrong there won’t be a committee meeting in the electronic control unit to decide what to do next. The rider will simply suffer the consequences of their error. And they’ll have no one to blame but themselves.

This, strangely, is the KTM’s big strength.

Rather than allowing every error to be soaked up, the bike rewards good riding with a wonderfully refreshing and involving ride.

Running downhill into a set of twin right-handers, the combination of the engine braking on the big twin and a gentle squeeze on the front Brembos gets everything nicely under control before tipping into the first corner.

The deep growl of the engine as it decelerates is complimented by an almost gyroscopic sensation as all the mass on the bike feels like it’s being compressed into the bottom of the motor.

The chassis felt absolutely neutral wherever I put the bike. The torque from the motor makes powering out the far side of the corners effortless, as the bespoke WP suspension keeps manners on the entire event.

The RC8 R is wonderfully old school and it marked the end of a motorcycling era. For this alone I love it. Call any of the team at Adventure Motorcycles Ireland on 053 94 22415 to experience the machine for yourself.

KTM bike insurance? Call our specialist team on 1890 945 950 for your motorcycle insurance quote.